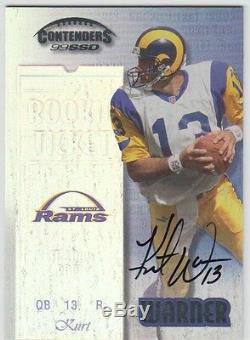 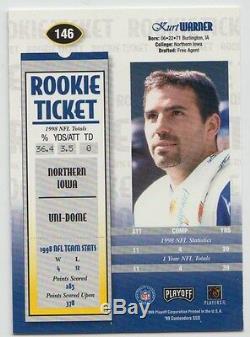 KURT WARNER PLAYOFF 1999 CONTENDERS "ROOKIE TICKET" ON CARD AUTOGRAPH. This is Kurt Warners Most popular rookie card out of the Six companies that produced an autograph version. Today you can't even count the autograph rookie cards of each rookie (Especially the quarterbacks , RB's, WR's) guys who touch the ball with regularity.

I will sell mine lower for a "CINDERELLA" career that just ended in the NFL HALL OF FAME. Sellers know we always get that one guy who just can't be satisfied. I really do ALL I can to make you very happy. I may start throwing extra jersey cards of Warner in packs if you remember to ask. I FIND THIS IS THE SAFEST WAY FOR YOU TO GET YOUR CARD.

Please check my other listings as I have many, many Hundreds of KURT WARNER cards that will be listed that range from Graded Gem Mint to 1/1 or other rare Rookie cards or duel Autographs or more. Kurt Warner holds many records and is one of the Greatest NFL stories there is from Stock Boy in a HY-VEE store to NFL Champion and SuperBowl and NFL MVP all in his first full season.